I had the opportunity to play Muirfield Village Golf Club last Thursday with my father-in-law, Dan, a friend of ours, Mark, and a friend of Mark’s, Bob, who is a member at Muirfield and was a gracious host. Dan flew us down at 7am, which took about two hours. We were shuttled to the course by a young employee of Muirfield named Andrew. Upon arrival, we were ushered in to the locker room and given guest lockers. The attendants checked our shoes to confirm that we had conforming spikes. I had my new True Linkswear University of Michigan themed shoes, so there was no spike changing.

In high school, the TC Central Golf Team flew down to Dublin, Ohio to play a match against Columbus Academy at Muirfield in October. Unfortunately, the weather did not cooperate and we were rained out. On this visit, I did recall the Proshop and the first hole, but not much more.

The weather was beautiful – sunny and low 80s. We arrived in time to hit a few balls on the range and roll a few putts. The greens were smooth, but not overly fast. The area had received quite a bit of rain recently, and the course was playing soft and long.

As I understand it, Muirfield is Jack Nicklaus’ “Augusta of the North.” It was very lush, green, and very well manicured.

We met Bob on the putting green minutes before our tee-time. Our caddies, Ryan and Preston, joined us at this time. Ryan carried Dan and my bags. Preston carried Bob’s bag and Mark used a cart. It was nice to walk the course and be relieved of having to carry the bag, but having a caddy took some getting used to for me. I found him useful for getting the general lines off the tees, but did not care to discuss how to strategize from thereon in. After about six holes, and some poor advice, I settled in.

Irving Meyer’s (OSU football coach) is on the left side of the seventh hole. Had I know this, I may have brought my U of M flag and taken a picture in front of it. Perhaps, this wouldn’t have been the most appropriate thing to do as a guest, but would have made for a fun picture!

At the turn, we stopped at the half-way house for some snacks and refreshments. Without thinking, I ordered an “Arnold Palmer.” Turns out that’s not what you call it when you’re on grounds designed by Mr. Nicklaus. I was informed that it’s a “half-and-half” or “Jack Nicklaus.” Woops!

There is a stream that comes into play an most, if not all, of the holes. There are also an abundance of ponds fronting or sidelining many of the greens. I kept my ball dry, but these could be more relevant had I played the course from the Memorial Tournament tees. As it was, from the blue tees, I didn’t hit more than a nine iron into any par four.

The finishing stretch is noticeably more challenging – a tight par five, a medium length par three, and two solid par four finishing holes. My driving was splitting the fairway, which helped tremendously. Less accurate tee shots would have made the holes much more difficult. 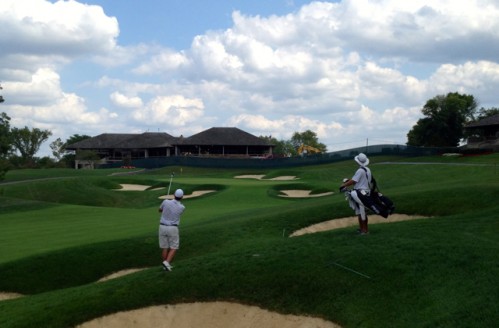 (Me hitting wedge to the 18th green.)

When we finished up, I had shot a 75 and was ready to try one of the famous milkshakes I had heard mentioned during the Memorial Tournament television broadcast. There were numerous flavors available, but, in the spirit of being in Columbus, Ohio, I ordered the buckeye flavor – basically chocolate and peanut butter. It was an excellent finish to an enjoyable day on the course.