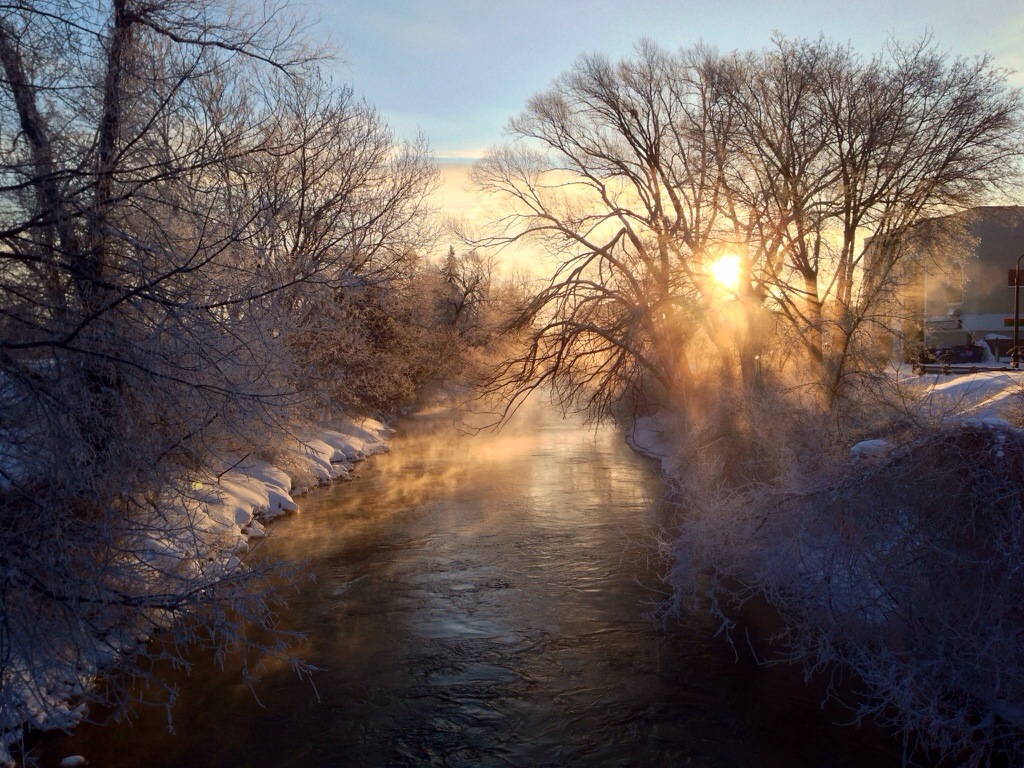 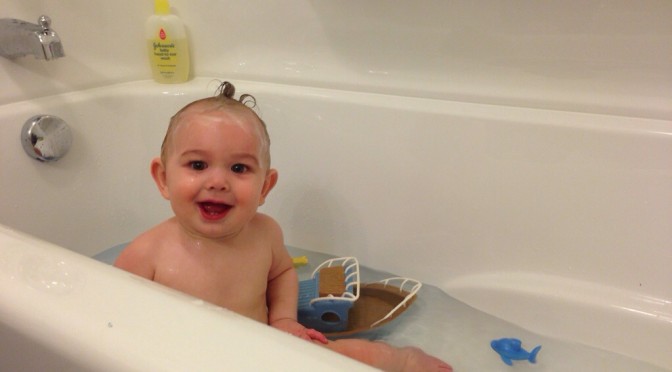 I think it’s funny that not only do all of Harvey’s toys have two noise settings, but that those settings are really loud and really really loud.

He loves the TV clicker, so we got an old one of the basement and gave it to him. He crawls around with it now.

Cruising is no problem for him, but he’s not quite walking yet.

We’re a bit concerned that we’ve overused the one-piece fleece onesie, which is way easier to change diapers in than the traditional pants-type outfit.

Harvey went to the nursery for the first time last Sunday, and did pretty well. I think the other kid set him off and we got buzzed to come pick him up.

It’s exciting to see him grow up so quickly, and there’s so much each day week and month that it’s impossible to keep track of everything. But I’m going to try! 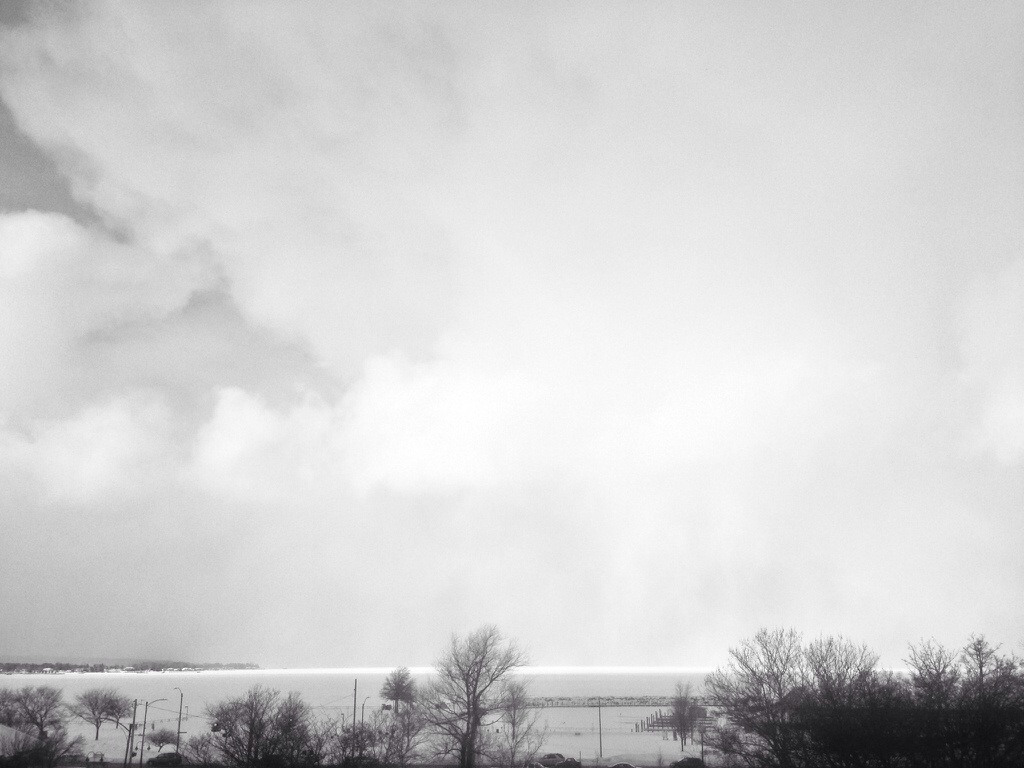 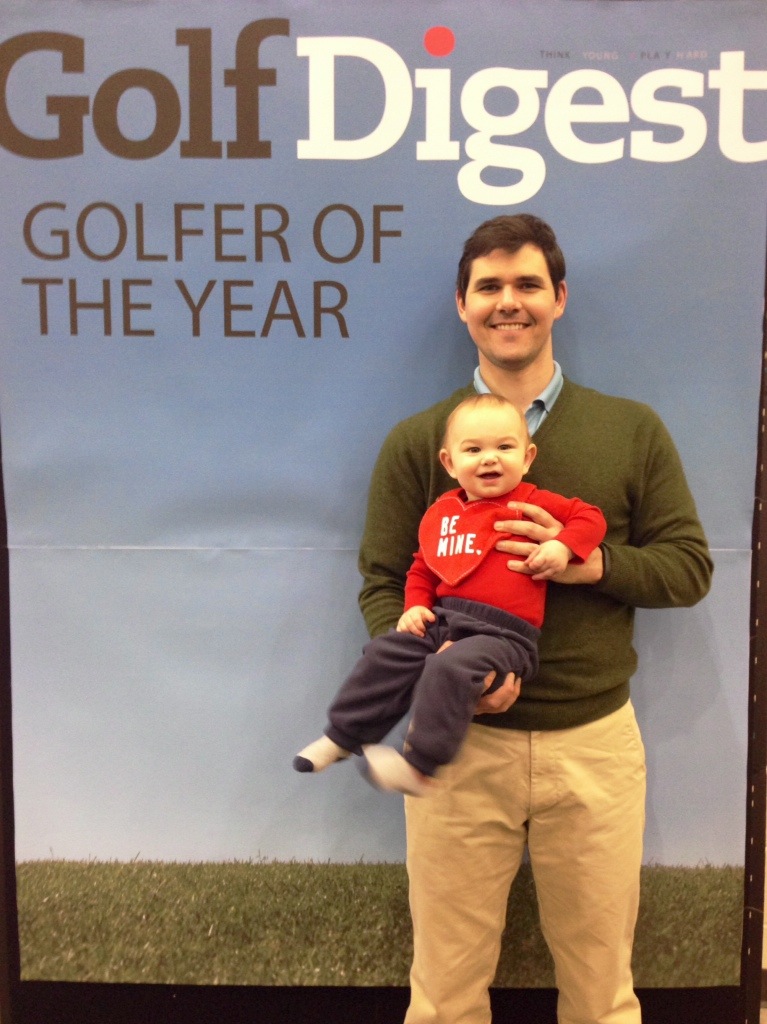 I dictated the following to Siri (iPhone digital assistant in case I forgot or a future reader is unaware) en route to work during January and February, 2014:

January 6, 2014: there is a snow buildup along the shore. Parts it juts out and peninsulas, where the sand underneath comes higher. Parts are broken into pieces like a jigsaw puzzle, crashing about. The water beyond is they Coolgreen sitting into a deep cold blue. The waves near the icy sure And wait, is to swans swim by in the mid ground. I can only see about half a mile out and then water and sky become one on discernible gray

January 7, 2014: I just dropped Harvey off, and have turned onto E. Shore Rd. It is plowed wide and clear, although the entire road is covered with a thin layer of firmly packed snow. The bay is to my left, covered with steam rising from the water, Which is warmer than the air. In the distance, the mainland, and behind that the sun rising. The sun’s beams. A concentrated bright orange and white peek behind the Grand Traverse resort.

January 10, 2014: the bay is covered with a fog that bleeds onto E. Shore Rd. The temperature is 24° and rising. Think orange lights are visible across the bay to the south, and the water is still. Everything is a version of gray dark, Marty, light, fading.

January 14, 2014: A single bird flies away from me, its wings up and down slivers against the pastel pink and orange of the sun coming out. The ice is down, and the water is mildly choppy. Blue on the back and pink on the front, it jostle’s about wrestling and wanting spring

January 20, 2014: The bay today is a cold green mass underneath the light white cloud. This guy comes down beyond the horizon to the foreground almost to the shore. Between the sky and the icy build up along the shore is that sliver of green.

January 21, 2014: The bay today is bursting with glowing steam, hovering above. On the horizon, a square rainbow at the end of a cloud to the north. The sun is bright and white, and rising and stretching its arms across the road in front of me. The snow is brighter today. The water is bluer today. The sky is lighter, and the trip -This journey through life-is as enjoyable as ever. The only parts untouched by this glorious sun are the backsides of the snowbanks facing to the west. And they have this bright sunlight to look forward to, for it will reach them and only a matter of minutes.

January 23, 2014: The bay today contains the narrowest of silver strips of calm water, backed by choppy water with a transparent missed dangling above. On the horizon, the faintest of pink of sunsets that I’ve seen this winter. There is hope of a bright day ahead, hiding behind the dark gray clouds blanketed the region for many many days.

February 14, 2014: the quiet silence of the drive along the shore, with the Art Deco gray shiny morning predawn sunrise, was unique from any other day that I’ve lived funny short.