The little guy had a cough on Saturday, and was progressively miserable throughout the weekend. Sorry buddy :o( Turns out he had his first ear infection. We’re having extra cuddle time and keeping a close eye on him. It’s no fun having a sick kid, and I’d trade places in a nanosecond! 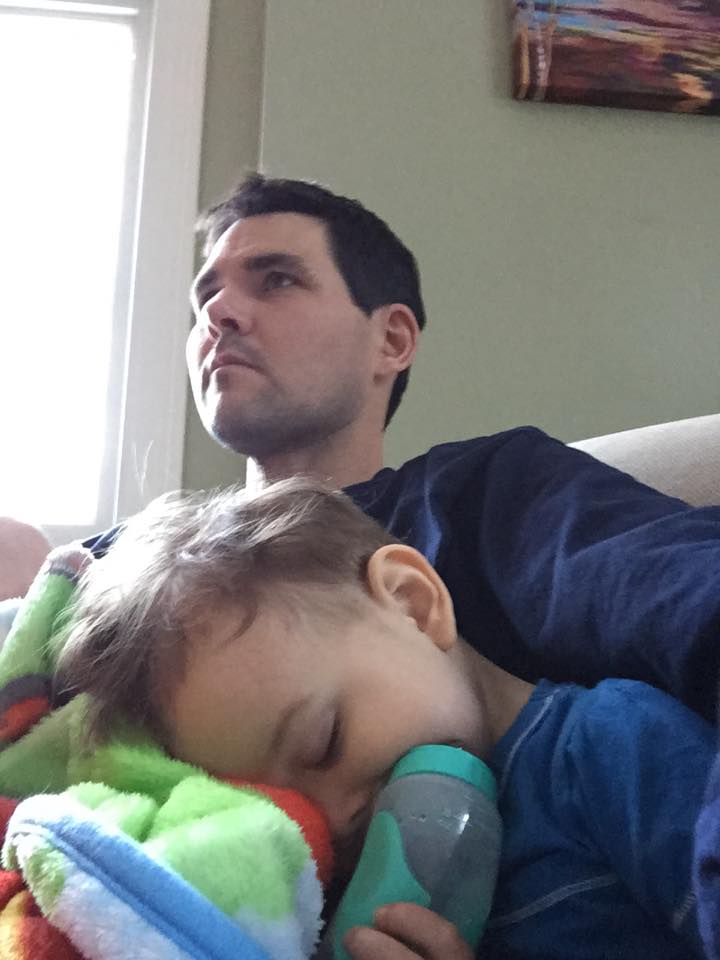 FIVE STARS. The only thing that would make it better would be pictures! And there are plenty of those online.

I recently finished, Dream Golf: The Making of Bandon Dunes, and it has awoken in me an interest in golf architecture. The book is authored by Stephen Goodwin, and is an excellent account of Mike Keiser’s growing passion and development fundamentals and the architectural details of bringing links courses to the west coast of the United States. I could hardly put it down, and was further intrigued by the extended details about the construction of Pacific Dunes and Old Macdonald, both designed by Tom Doak, whose design firm, Renaissance Golf Design, is located in Traverse City, MI. And little did I know that my favorite course growing up, High Pointe Golf Club in Acme, MI was his first design. If only it were still open, I would love to go back and explore its many still-familiar features. And I learned of “The Dunes Club,” Keiser’s first course, located in New Buffalo, MI (!) . . . a nod to Pine Valley and one of, or the, top nine-hole club in the country. (Who knew?!)

Upon finishing the book, I went to the public library and checked out two golf architecture books to flip through, initially, with hopes of reading more in depth soon. I’ve even scouted farmland nearby, dreaming of digging a nine-hole links course with little more than the spade in my garage and good intentions. Alas, I may need to make my millions before I venture down that road. But at least Dream Golf has brought a new part of the game to life for me.

I’ve since learned that there are the following courses at Bandon Dunes, all of which comprise “a golf trip that must occur”:

Following are some of my favorite excerpts from the book.

“As a golf course developer, he was starting out pretty much from scratch. He had never invested in any kind of golf deal, and he wasn’t even a member of a golf club. But golf was in his blood, and when he said no to the investment bankers dangling their schemes in front of him, he knew in a general way what direction he wanted to take. He was headed toward that shining, elusive realm known as the kingdom of golf.”

“But the best architects still believed that good land—undulating land, not steep but with pronounced topographical features, and with porous soils, not a heavy clay—was a sine qua non for a good golf course.”

“To learn golf architecture one must know golf itself, its companionships, its joys, its sorrows, its battles—one must play golf and love it.”

“He wrote thoughtfully and persuasively about the principles of design, declaring that golf holes were either heroic, strategic, or penal in nature, and that a good architect mixed these three types of holes according to his site, blending them into one harmonious composition.”

“Mike was in heaven. He loved the simplicity and grandeur of the golf courses and the complete lack of pretension in all the other arrangements. The clubhouses were modest, the food was plain, the hotels were drafty, the weather was the usual Irish mix of rain and mist with occasional peeks of sunshine, but the golf was splendid.”

” “The Almighty intended this place for gawf,” Old Tom declared when he first laid eyes on the dunes of Machrihanish.”

” “It seemed that this land had been lying here for years waiting for someone to lay a golf course upon it,” Bobby Jones wrote after his first sight of the valley that now forms the amphitheater at Augusta National.”

“A great golf course is “nature perfected.” It is neither wholly natural nor can it be wholly unnatural or manufactured.”

“A walk in the vast and barren sand hills of Nebraska is not nearly as compelling as a round of golf at Sand Hills Golf Club.” (A course I had the privilege of playing in the fall of 2014.)

“For Mike, the lesson was crystal clear: If you wanted to create something exceptional, something extraordinary, you had to be fearless. You had to be prepared to follow your dream.”

“Though educated as a lawyer—he was assistant district attorney and later assistant city attorney in charge of prosecution in his hometown of Topeka, Kansas—his lifelong passion had always been golf course design, and, after becoming a contributing editor on architecture for Golf Digest in 1985, he had become one of the most influential critics in American golf.”

“Though he didn’t say so in the letter, David imagined the clubhouse and village as having an effect similar to the one that towns in Scotland had. In towns like Machrihanish or North Berwick or Carnoustie or St. Andrews, the golf course starts at the town’s doorstep, so to speak, pushes off into the wilds of nature, and then, at the round’s end, returns to civilization.”

“He relied heavily on his land-use attorney, Al Johnson, whom he’d selected partly for his unflappable calm. (“Al wore sweaters like Mr. Rogers. He was the ultimate down-home lawyer, which was exactly what I wanted.” (Note that I like this quote because I’m a lawyer and my last name is Rogers.)

“In Anatomy, Tom’s chapter on “The Green Complex” carries as its epigraph a quote from C. B. Macdonald: “Putting greens are to golf courses what faces are to portraits.””

“Throughout the round, he made sure that I noticed the weave and roll of the greens, and the variations in the Chicago Golf Club version of the Macdonald/Raynor iconic holes—the Punchbowl, the Cape, the Biarritz, the Double Plateau, the Redan, the Eden, the Road.”

We clean out the basement form time to time, trying to keep the “stuff” from piling too high! I’m notorious for holding on to things . . . especially, all of my collections of everything from childhood. I enjoy the re-discovery upon returning to the items, but sometimes it’s apparent that things have to go. Plus, we have to make room for Harvey and his little brother’s collections!

The following quote is a good approach to dealing with the less important possessions that pile up . . . like extra jackets, clothing, kitchen appliances, old sports equipment, parts of lost tools, etc.

“Look at a possession. Pick something. Anything. Have you used that item in the last 90 days? If you haven’t, will you use it in the next 90? If not, then it’s OK to let go. . . . [B]e honest with yourself. If your material possessions don’t serve a purpose or bring you joy, then they are likely in the way of a more meaningful life.”

Truly, we live with mysteries too marvelous to be understood.

How grass can be nourishing in the mouths of the lambs.
How rivers and stones are forever
in allegiance with gravity
while we ourselves dream of rising.

How two hands touch and the bonds
will never be broken.
How people come, from delight or the
scars of damage,
to the comfort of a poem.

Let me keep my distance, always, from
those who think they have the answers.

Let me keep company always with those who say
“Look!” and laugh in astonishment,
and bow their heads.

According to this Golfweek article, the following are the top public golf courses in Michigan. The “m” means modern course and the “c” means classic course. I placed my initials next to the ones I’ve played . . . looks like I have some playing to do!

It’s interesting to note that there is only one classic course on the list, which is the University of Michigan course. I have fond memories of my college rounds there and keep hoping to get back and play it, but we’re usually down there for a football game when they are parking cars on the course.

Lindsey and Harvey bought maple syruping supplies at McGough’s in Traverse City. After reading a few articles and watching a YouTube video, we went out and started drilling holes in trees. We found two with running sap, placed our spiles and hung our bags. Now we wait and see what we get. The next adventure will be boiling it down. 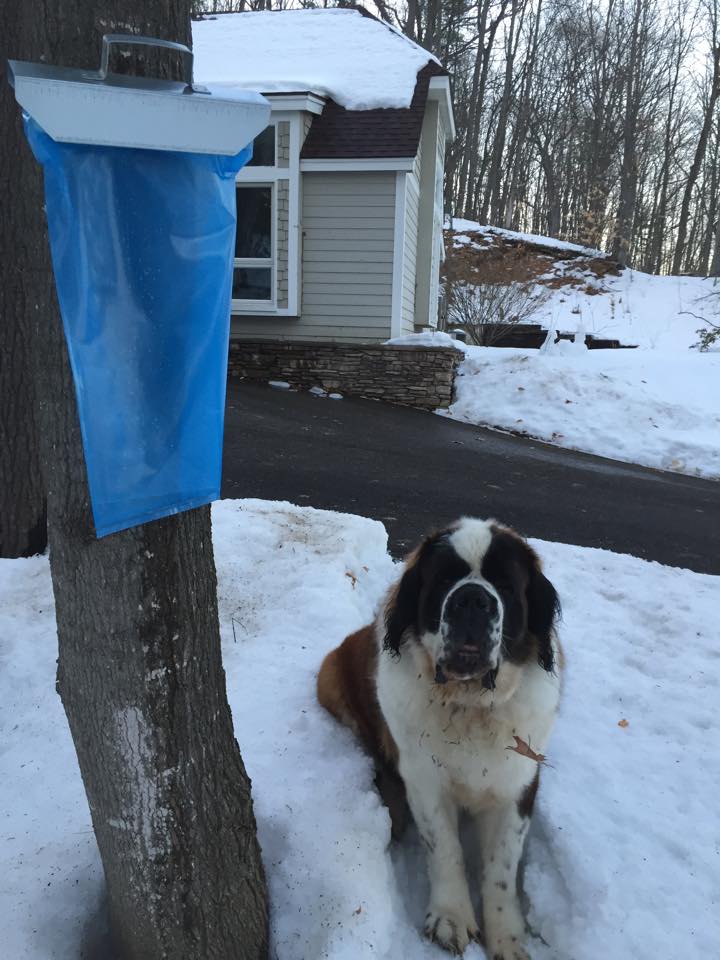 We bought an old metal pot from Walt & Susan’s Antiques on Old Mission Peninsula, and then built a roaring fire in the metal pit on our back deck. This all began about 5:30pm. Reducing the 1.5 gallons of sap to about a 1/3 cup of syrup took almost six hours. I finished up around 11pm by filtering the embers out of the syrup via a coffee filter. It was satisfying to end up with what we set out for. Here are some pictures. 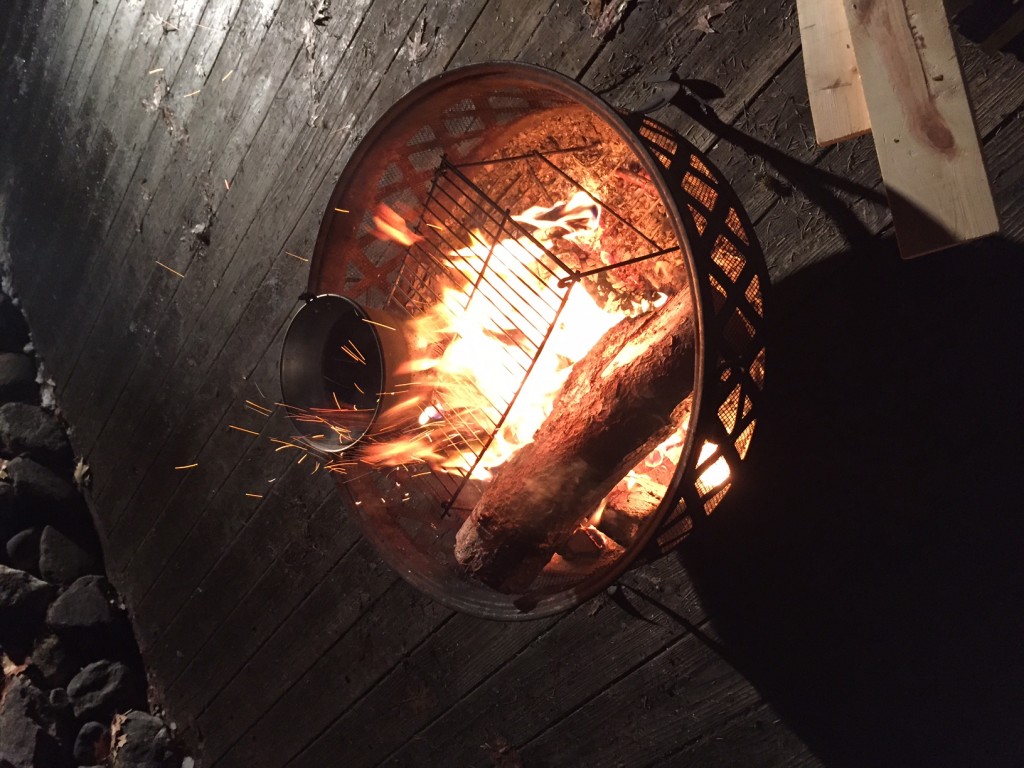 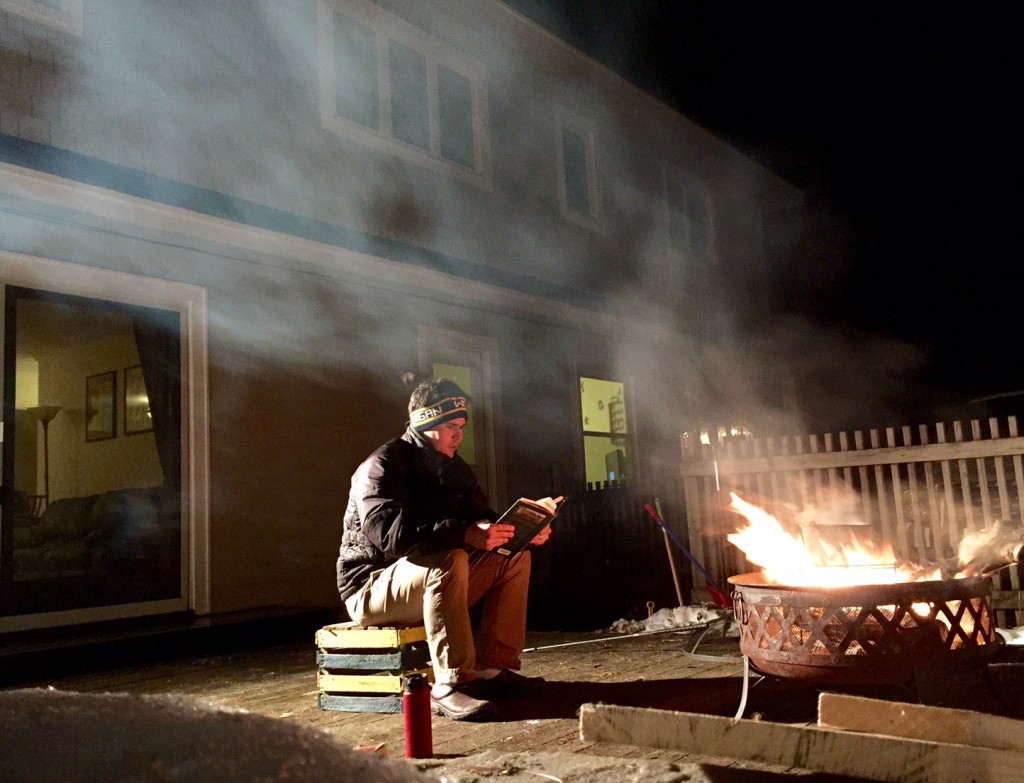 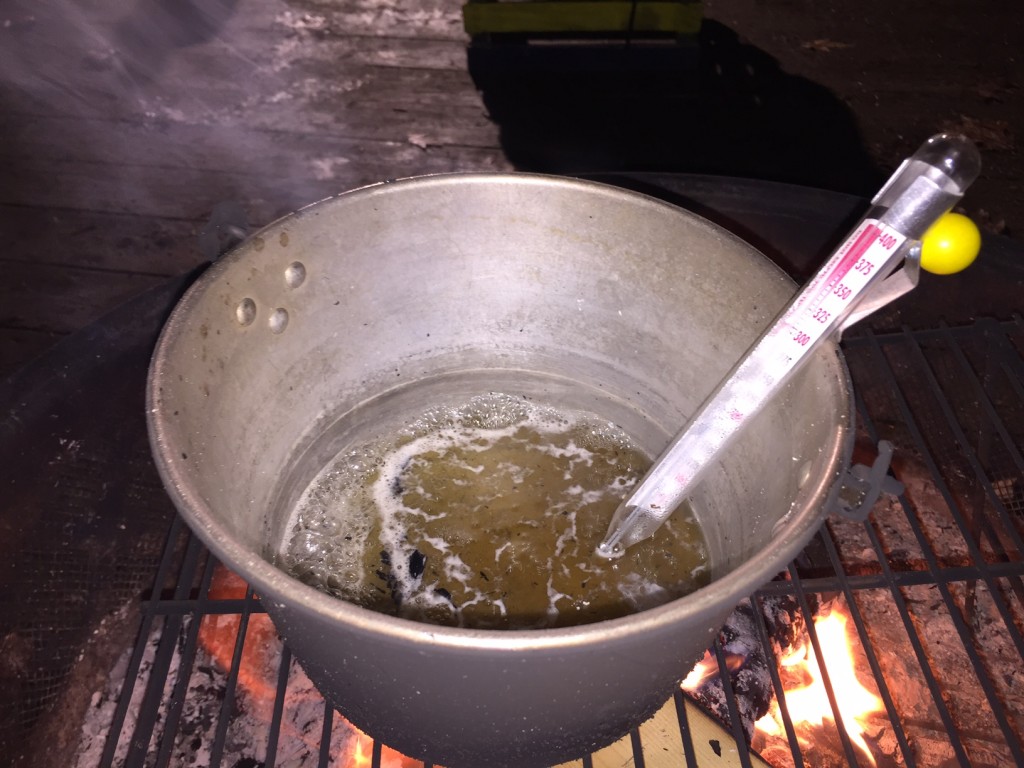 (11pm-ish . . . when I determined it had reached 219 degrees, seven degrees above water’s boiling point.) 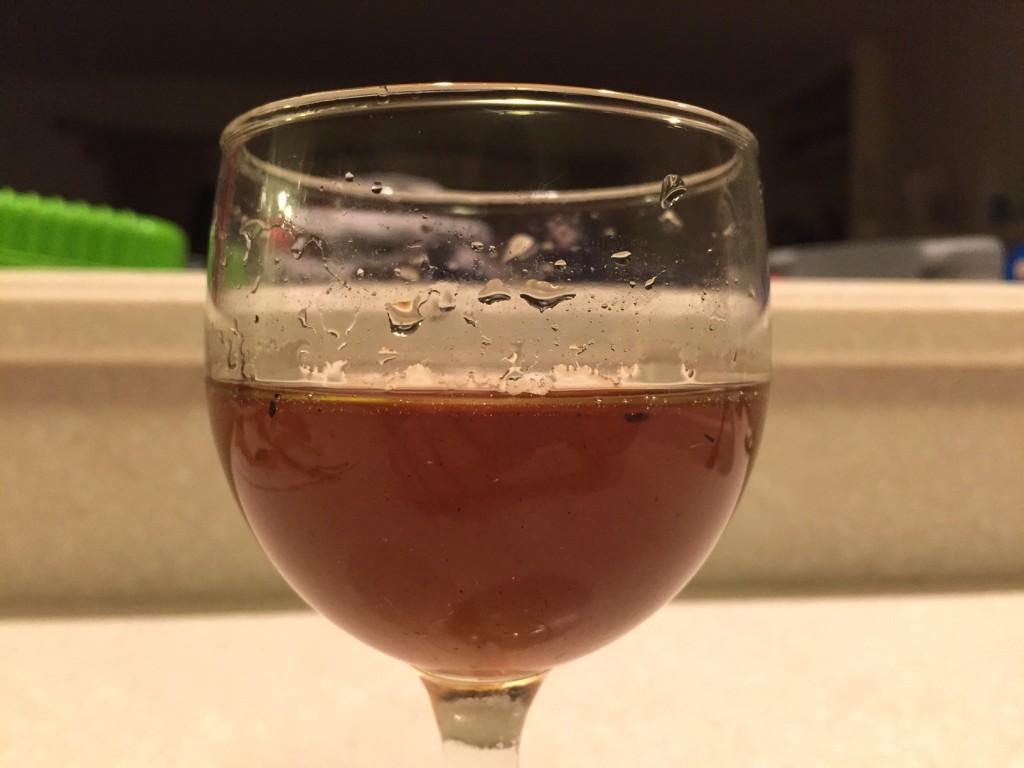 (The end product. It’s sweet, and mable syrup like!)

With the start of the 2015 golf season in the Midwest just around the corner (hopefully!), I’ve compiled the following wishlist: