About seven inches of snow fell last night, which gave me an opportunity to snow blow this morning. It takes six trips up and down the driveway with the snow blower to clear a path wide enough for a car to pass. Between the clearing of the snow and the salting of the hill, the whole process takes me about 1.25 hours – usually from 6:15am to 7:30am. I thoroughly enjoy doing this – at least so far. Perhaps, because it is so much easier than shoveling the whole darn thing. And there is great satisfaction in seeing the clean-cut walls of snow along the edge of the driveway.

Today marks the end of the first month of 2013, which passed quickly. Where did the time go?

And the other (exciting) news . . . our herb plants from mom and dad are sprouting! See the picture below.

On to February, the month of Black history and Valentine’s Day love.

That’s Yogi, above, looking over the snow-covered beach on the bright and blue Saturday. That night, Lindsey and I saw saw Silver Linings Playbook at the State Theater. It stars Brad Cooper and Jen Lawrence, as a perfectly imperfect couple, and has a solid message and beautiful ending.

At church today, I sat next to Lindsey and behind a six-inch white pole while we listened to a sermon that addressed how the church has, and continues to, revise the teaching of the Bible to stay current with modern day beliefs. (E.g., men and women are equal.) It was a profound sermon presented in a subtle way. The more I think about it, the more questions I have.

After, we had supper with Grandma and Grandpa Lanham at Dan and Peg’s and then retired to lay on the couch, nurse our stuffed stomaches, and watch televised golf for hours.

As the next week of our lives, and the 31st of Baby Rogers’, begins, snow is floating down onto the winding driveway, waiting for me to pull the rip-cord on the snowblower and blow it to the side at an hour far too early for the sun to rise.

Have a spectacular Super Bowl week. 49ers or Ravens? I’m going 49ers, in remembrance of the ol’ Joe Montana days of my youth.

This past week began with the shocking and sad news that Yogi Bear Rogers has cancer and won’t be with us too much longer. How long, we don’t exactly know because he’s such a big lovable brute. And I’m sure he will stand strong.

When he stands, it is as a mighty lion stands – a deliberate struggle of a beast battered by carnivorous dreams. Restless and cold, he shifts through the monochrome darkness of night. With each step his paw lands with the thrust of an uncalibrated pile driver trying to beat down the house in which he lives. His good master does not wake; not so for the neighbor girl tumbling beyond the pale green drywall.

He reaches his mirage and begins his inarticulate laps from the cool stainless steel bowl. Water splashes on the wall and the floor and his crusty black nose. When the struggle is over, strands of sinewy slobber drape his mug. The “mighty shake” is coming. The walls recoil in terror. The picture frames fall flat. The clean – the spotless – the untouched – they all post their guard – ready and waiting. His great brute box head turns violently and sets in motion a furious chain reaction of jowl to drool to mid-air acrobats of gelatin-like mouth droppings seeking out the clean – the spotless – the untouched.

The work week ended on a higher note with a fun dinner with the Jeffries at the TCGCC, where we caught up and hopefully didn’t talk about baby boy Rogers too much. But, really, what is more exciting than him these days. He’s hiccuping and moving all the time, and it simply floors me to see and feel his new life. Just to know that – to anticipate him entering this world is amazing. I cannot wait to not sleep, and to be disrupted from whatever routines we have now. Life will change, and there’ll be no looking back.

I watched an interview of David Letterman by Charlie Rose this morning and Letterman had the following to say about fatherhood:

As difficult as being a father is, it’s entirely complimentary with everything else in your life. You get your prescription updated. You see things you never saw before.

Last night we had dinner at OM with Dan and Peg, and then saw, “Over the River and Through the Woods,” at the Old Town Playhouse. It was a story of successful young man who had lived in one place his entire life, and had received a promotion at work that would take him from the East Coast to the West Coast – and away from his four grandparents, with whom he had dinner each Sunday. The story was light-hearted at first, but then began to peel away and reveal the more thought-provoking issues faced by the young man and his grandparents. Issues for the young man such as leaving to find his way, to prove himself, to live his own life. And issues for the grandparents, such as recognizing his need to do that.

I found the play very relatable, real, and honest. I would hope that most people in the audience could find something in the lines delivered that resonated with them. There was a scene at the end that brought me to tears – that of a grandfather being selfless, of accepting that his grandson needed to set out on his own, and that although that took him away from the family he knew, such a journey was necessary to make a family of his own. The grandson would not forget his family.

When all is said and done, what more can any of us ask for but to have made an impression on those we love, so that they remember us and miss us when we are gone. At least for a little while.

With that I am going to close the door on an emotional and busy week, and look ahead to the rest of January. Winter has returned, and a fine snow is falling on the Double Dogleg as I sit and write in front of the sliding door. Yogi is outside, running from Mount Yogi to the fence, watching the activity of his own wonderful little world.

Have a wonderful week.

Here’s me having almost completed construction of the crib. It was easy to put together, except for a few tight spots where I could only turn the alan wrench a couple of inches at a time.

Here’s Lindsey looking beautiful and very happy to have the crib constructed and the nursery coming together.

The PGA Tour’s 2013 season begins today in Hawaii. As golf nuts, we look forward to this day and the new season each year. With it comes another round of majors to watch on TV, including our favorite, the Masters in April.

Here’s a picture of Dad and me at Kapalua, where this week’s opening tournament is being played. I was 18 at the time, and just finishing high school. We were on a trip with a bunch of guys, including a friend of dad’s from the UP, Bill Raduchel, who we’ve kept up with over the years and who was my first boss coming out of college. 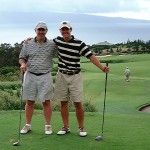 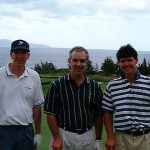 Fred, Dad, and Me 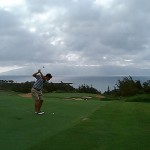 Moloka’i in the background

Dan and I kicked off the season last night by playing a few holes on his golf simulator. I’ll speek for myself by saying that I’m a little rusty, and need more work before the season begins.

I found this idea online recently. You send a high resolution picture to Staples, and have it printed as an engineering print. It’s cheap, not high quality, but you can get big (36″ by 24″) prints for less than eight dollars. Here’s a couple I had done, which we will hang in the basement. Pretty cool.

I have a lot of random stuff, much of it in various collections I’ve accumulated over the years. Pezz dispensers, miniature flags, juggling paraphernalia, golf balls, keychains, t-shirts, putters, etc. Lindsey can attest to this. Since marrying me, she has spent hours patiently sitting and watching/helping me sift through and organize my stuff. What can I say, I’m a saver!

Depicted below is an apron, which reads, “Grandma Loves Me,” and has my pin collection on it.

It’s fun to look through these physical things and reflect on the memories from the adventures that led to their acquisition.