Here is a video of a game we were playing with Harvey this evening, which may have been invented by Aunt Kathy earlier today. Harvey throws a block at me and I pretend it knocks me over. He’s almost laughing too hard, which is a great sound to hear. :o)

MAPLE CITY — John Arthur Lanham Jr., 86, lifelong resident of Maple City, passed away peacefully with his family by his side, at Munson Medical Center on May 7, 2014. John was born on Sept. 13, 1927, in Bendon, to the late John and Mary Agnes (Hawk) Lanham, one of eight children.

As a young man John served his country honorably as a member of the United States Navy. Following his return from the service he remained in the Naval Reserves for several years.

He began his self-employed career in construction and built homes along the shores of Big and Little Glen Lake.

In 1951 John met a beautiful young woman named Nancy Jane Newman. Once Nancy’s brother returned home from the Korean War, John and Nancy were married on June 12, 1954. Together they shared 59 years of marriage and cherished every minute they spent together.

In addition to his construction work, John was a substitute rural mail carrier for the Cedar Maple City U.S. Postal Service for 10 years. This allowed him to meet and develop lifelong friendships with many of his neighbors. He retired from building homes in 1984 and became a full time mail carrier for five years.
John was also a gentleman farmer raising animals and growing grains, fruits and nut trees. He even grafted his own variety of fruit, a cross between a peach and an apricot which he aptly named “the Nancy J” after his sweetheart. In recent years John loved driving company in his golf cart around the orchard pointing out all of the different varieties of fruit, knowing each apple or cherry or pear tree by name. He liked to experiment with fruit and even grafted an apple tree with 26 varieties. Although walking became increasingly difficult after his strokes, he never lost his memory, thirst for knowledge and unique sense of humor.

John enjoyed his green house, swimming, and even swam across Little Glen Lake when he was a young man, waterskiing behind the red family boat and fishing for anything that would bite. He also liked to pave new trails with his 1947 Willy Jeep.

Stating that John loved to hunt would be an understatement. He was a 66-year member of the NRA, liked to clean rifles for the VFW Honor Guard and shoot targets throughout the year. He was also a certified gun safety instructor. This past fall he even tagged a six point buck with the help of his grandson, Zach.

John was an avid reader and stamp and video collector. He enjoyed watching movies, especially war movies and anything starring John Wayne. In his younger years he also loved to twirl his bride around the dance floor to a polka or two. He also loved to travel around the United States.

John served as treasurer for the Rose Hill Cemetery Association and the Old Settlers Picnic Association for many years. He was a member of the Cherryland VFW #2780 and the Glen Lake Community Reformed Church. John was also a proud member of the Cedar Maple City Lions Club and was King Lion for two years.

Although John had many hobbies and interests, nothing brought him more joy than his family. He made each member feel special and loved. He brightened our day with his wonderful sense of humor and gentle smile. He taught us all that whatever you do, you must give it your all. He taught us that hard work is very important and so is having fun. Perhaps the greatest lesson we learned from John is the importance of family, not just spending time together on the holidays but all year long, celebrating anything from birthdays to Sunday dinners.

Please join the family for visitation at the Reynolds-Jonkhoff Funeral Home on Monday, May 12, 2014, from 4 to 8 p.m., to celebrate and honor John’s life. The funeral service will be held at Glen Lake Community Reformed Church at 11 a.m., with visitation one hour prior, on Tuesday, May 13, 2014. Following a luncheon, graveside services will take place at Rose Hill Cemetery, where he will receive full military honors.

Memorial contributions in memory of John may be directed to Cedar Fire and Rescue, Cedar Maple City Lions or the Glen Lake Community Reformed Church.

Please visit www.reynolds-jonkhoff.com to sign John’s online guestbook and to share your favorite memories and condolences with the family.

The family is being cared for by Reynolds-Jonkhoff Funeral Home.

We went to Red Ginger on Friday night to celebrate mom’s birthday. (I’ll let her tell you which one!) It as a great meal, and we topped it off with MOOmers Ice Cream. Mom, we love you and appreciate all that you do for us and for Harvey. Cheers to many more adventures to come. 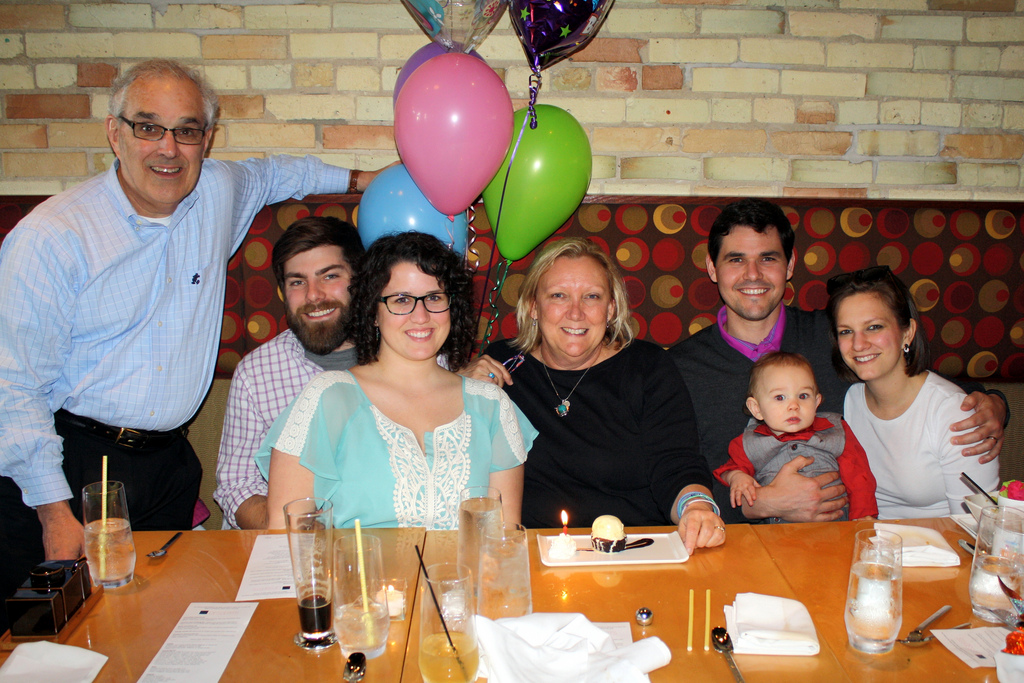