We had a unique opportunity today to help a friend harvest his family’s Riesling grapes for processing into wine. We started mid-morning. The cold wind cut through the bare vines as we nipped clusters of grapes with pruning sheers. Most of the grapes were within three feet of the ground – the perfect height for Harvey to pluck one grape after another. He must have eaten fifty!

At home in the afternoon, we harvested leaves and thousands of acorns and deposited them deep in the woods. Mother nature can transform them into rich soil. The number of acorns is astonishing. With each gust of wind, they rain down on the roof of the Hielands House.

The weekend ended with my first trip to Beers n’ Hymns at Right Brain Brewery. I’d never been to either Right Brain or BNH, so the evening was double-fun. Lindsey’s co-worker, Rick, was playing keyboard and the place was packed full of folks singing away. (And, the chips and guacamole was excellent!)

Have a great week! Here’s some pictures of our weekend fun. 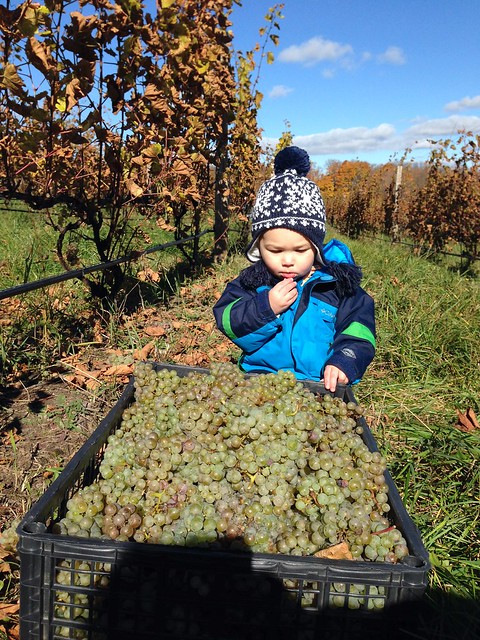 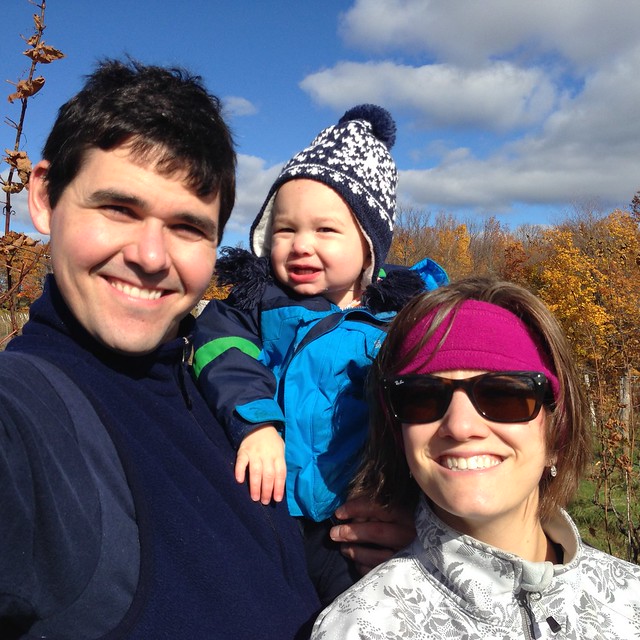 “The best way to predict your future is to create it.” ~ A. Lincoln

“I want to do with you what spring does with the cherry trees.” ~ Pablo Neruda

“Marriage is not a noun; it’s a verb. It isn’t something you get. It’s something you do. It’s the way you love your partner every day.” ~ Barbara de Angelis

“Time is our most precious commodity.” (Economic good, something useful or valued.)

“Productivity is a means to an end; not an end unto itself.”

“It’s not productivity. It’s not innovation. It’s identity. If you’ve lived a life where holidays are a nuisance, where you’ve missed your favorite uncle’s funeral and your children’s childhoods, in a culture that conflates manly heroism with long hours, it’s going to take more than a few regressions to convince you it wasn’t really necessary, after all, for your work to devour you.”

“I’m a huge proponent of not subscribing to other people’s definition of “having it all.” Having it all doesn’t necessarily mean being a law firm partner and having kids. Decide what it means for you, and then strive to achieve that.”

“The idea is to make the largest dent in the universe that you can and have fun while doing it.”

“It was the first kiss for both of us. We never really talked about it afterward, but I think about the events of that day again and again, and somehow I know that Winnie does too. Whenever some blowhard starts talking about the anonymity of the suburbs, or the mindlessness of the TV generation. Because we know that inside each one of those identical boxes, with its Dodge parked out front, and its white bread on the table, and its TV set glowing blue in the falling dusk, there were people with stories. There were families bound together in the pain and the struggle of love. There were moments that made us cry with laughter. And there were moments, like that one, of sorrow and wonder.” ~ Narrator, end of first episode of The Wonder Years

“Man surprised me most about humanity. Because he sacrifices his health in order to make money.
Then he sacrifices money to recuperate his health. And then he is so anxious about the future that he does not enjoy the present; the result being that he does not live in the present or the future; he lives as if he is never going to die, and then dies having never really lived.” ~ Dalai Lama 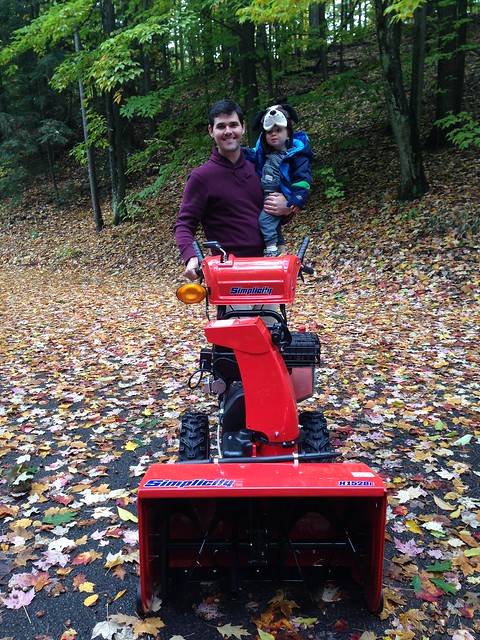 Here I am – the proud new owner of a Simplicity 28 inch snowblower. It has heated handles, a built in light, electronic spout adjustments, and so so so much more! I will miss the Ariens snowblower. It didn’t deserve to kick the bucket so soon, but I learned a lesson – check for oil at least once a year!

Grandpa R, anytime you need a snowblower, let me know! I owe you one. 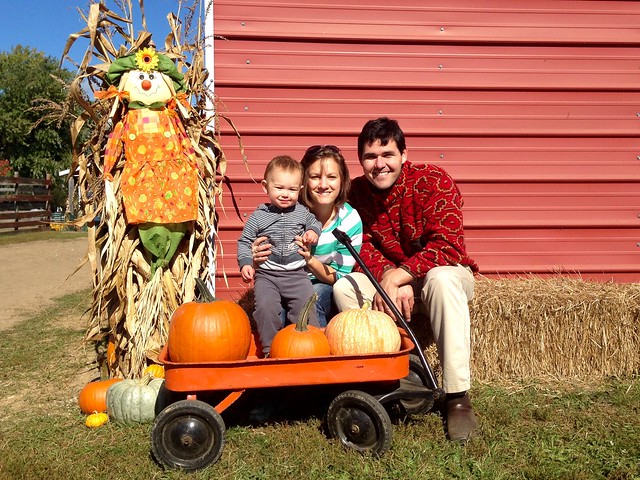 Harvey, you enjoyed a cinnamon sugar donut, watching the goats, and running through the pumpkin patch. We enjoyed watching you have fun! 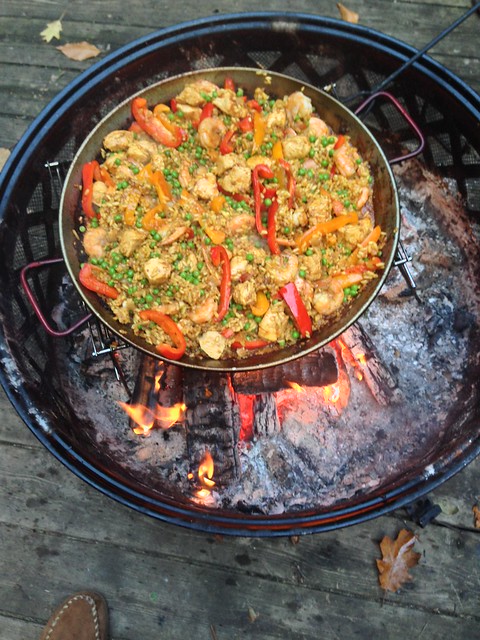 Grandma and Grandpa R gave me a paella pan for my birthday, so we tried it out tonight. The end result was tasty, but a little too smokey. We’ll have to tone down the spices and maybe raise the pan out of the fire next time.

John V. Goebel, III of Lafayette, CO passed away on October 5, 2014 at TRU Community Care Hospice Care Center in Louisville CO. He is survived by his wife of 50 years, Sandra K. (Sweezey) Goebel, brother Guy Goebel of Washington, sister Roberta Rogers of Michigan, and several nieces and nephews. John was preceded in death by his father, John V. Goebel II and his mother Evelyn R. (Feldt) Goebel. He was born in Flint, MI in 1943. John served honorably in the U. S. Navy Submarine Service from 1961 to 1969. After moving to Colorado in 1970 he earned his Bachelor of Environmental Design Degree at the University of Colorado, Boulder and his Masters of Landscape Architecture at the University of Colorado, Denver. He was licensed by the State of Kansas to practice as a Landscape Architect and was a member of the Colorado Chapter of American Society of Landscape Architects where he held various offices during that time. He served on the Lafayette Planning Commission from 1990 to 2002 and was Chairman of the Planning Commission for 11 years. While on the Planning Commission he was instrumental in bringing the Good Samaritan Medical Center to Lafayette and provided the landscape designs for several city parks. A memorial service will be held at Darrell Howe Mortuary 1701 W. South Boulder Road, Lafayette, CO 80026, on Saturday, October11, 2014 at 10:00 a.m. Donations may be made to the American Diabetes Association , The American Renal Association, or the TRU Community Care Hospice of Lafayette, CO.