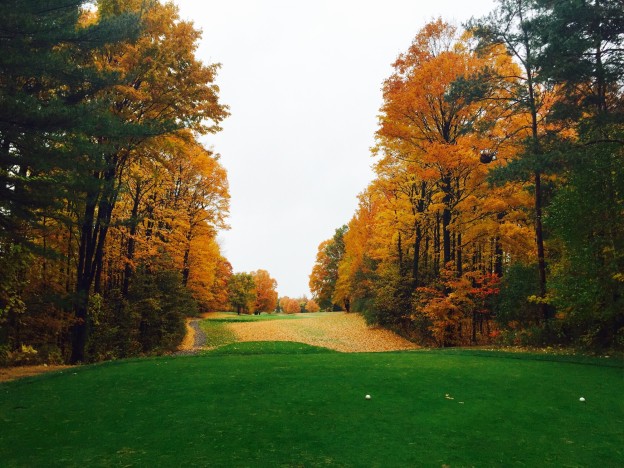 I’m embracing the mantra, “Have fun golfing.” My last four rounds include a back-yard course, a tough man event, a round with dad, and six holes with hickories.

Dad and I skipped out last Wednesday for our annual nine holes, which is usually played on Father’s Day. The afternoon was the middle of a 70s-in-November stretch of perfect weather. The leaves were down and it was windy. If was a fun round, and we both agreed that we should play more often and add in Lindsey and the boys sometimes.

This afternoon, Dan and I played a half-dozen holes while Lindsey and Peg played with Harvey and Carson. It was cool and breezy, but there wasn’t a cloud in the sky … and only two other golfers on the course. I had fun playing with the hickories and finished with a couple pars after figuring them out (again)! I’d like to play with them more often next year.

Here’s a link to the Nightmare on Union Street event from a couple weeks ago. 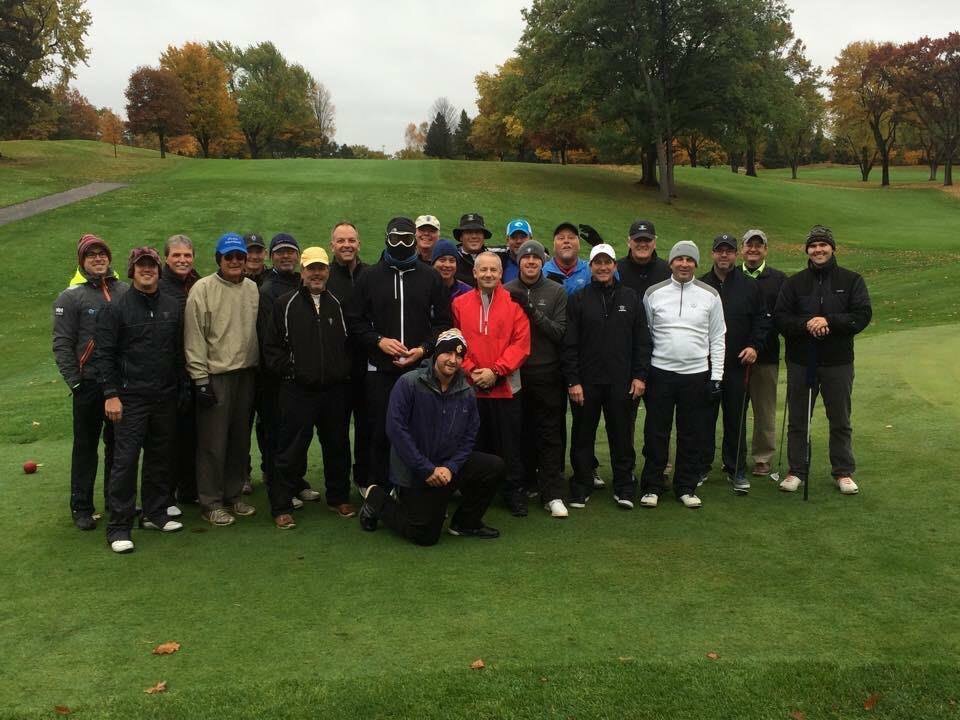 “In the past, we used to think that front hole locations were more difficult when they were protected by hazards,” he says. “But today, players hit the ball so high and they impart so much spin, getting the ball to those locations is not so difficult . . .

“Often, it is hole locations at the back or the corners of the greens that are most difficult because players want to fly the ball, even beyond the flag, and spin it back.

I had the pleasure of playing the Valley High C. C. on this beautiful 71° sunny October Sunday. Ed and Tyler had played before, but Brandon and I we’re seeing the unique 9-hole golf course for the first time. We played once to record individual scores (35 for me) and again for scramble scores (25 for team Brandon & Chris; 24 for team Ed & Tyler … the champs!). Even after one round I gained a tremendous amount of knowledge on where not to go. Great fun! Here are some pictures. 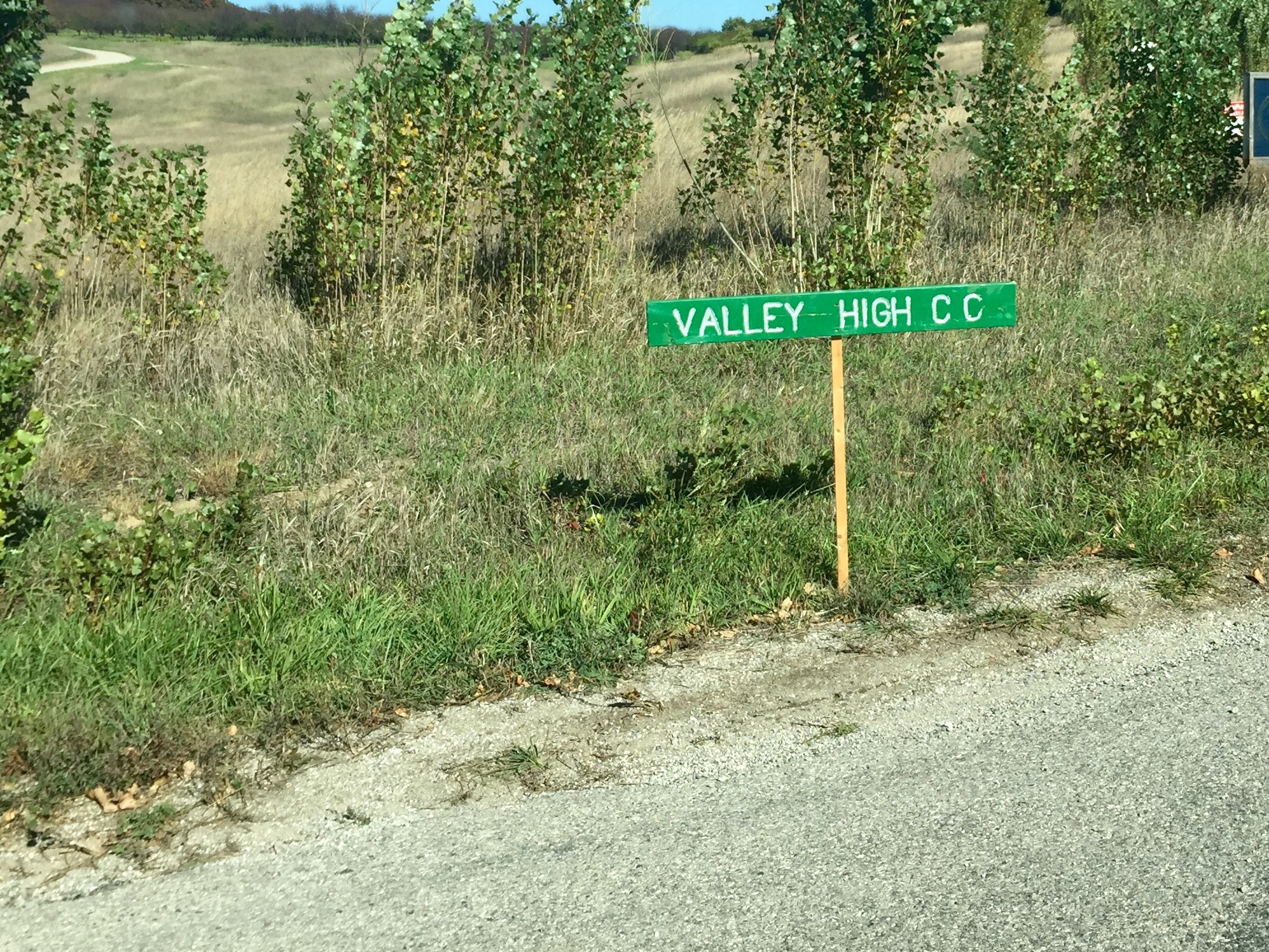 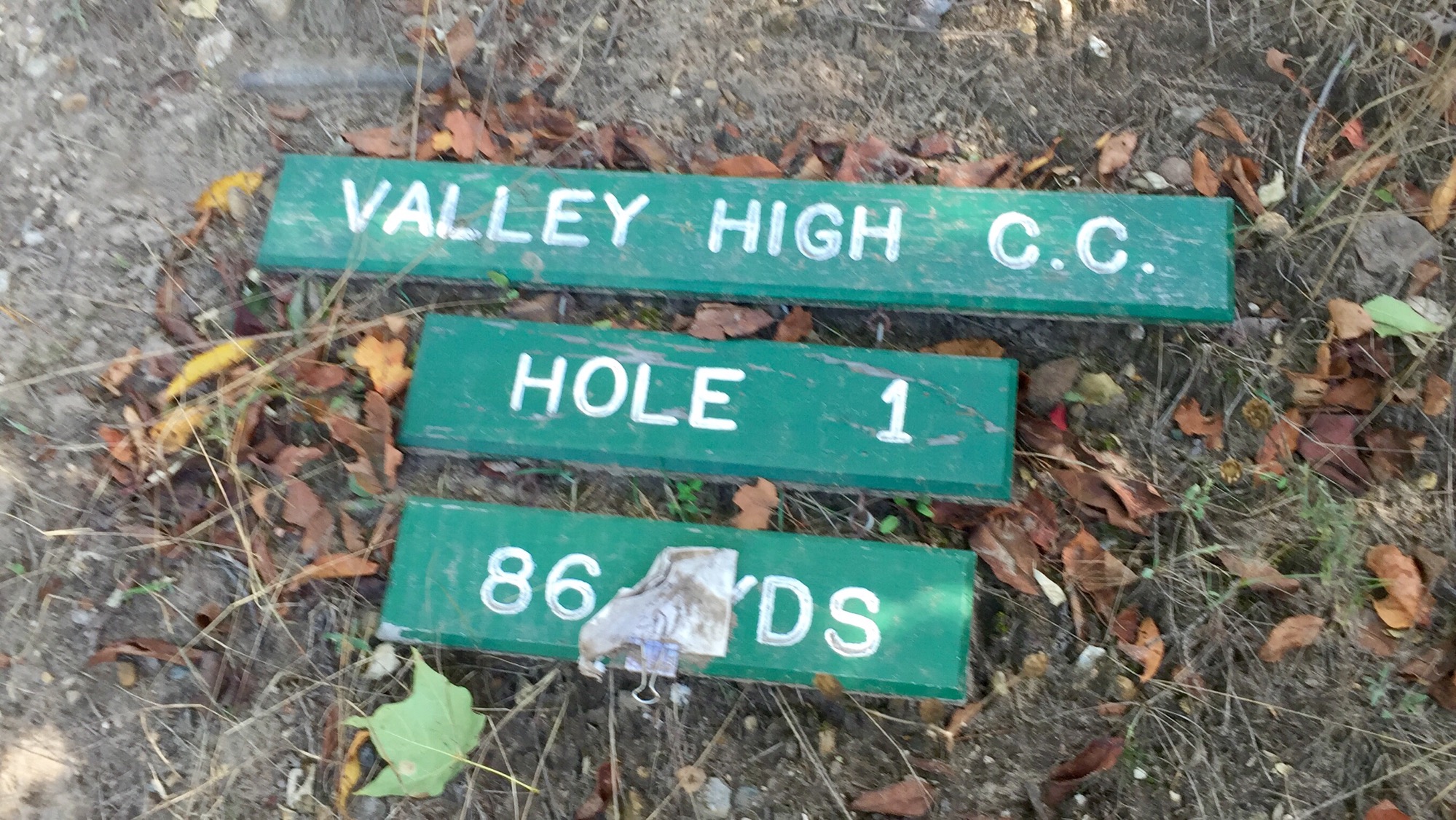 Actual yardage, 123 yards. Below, looking from the first tee to green. 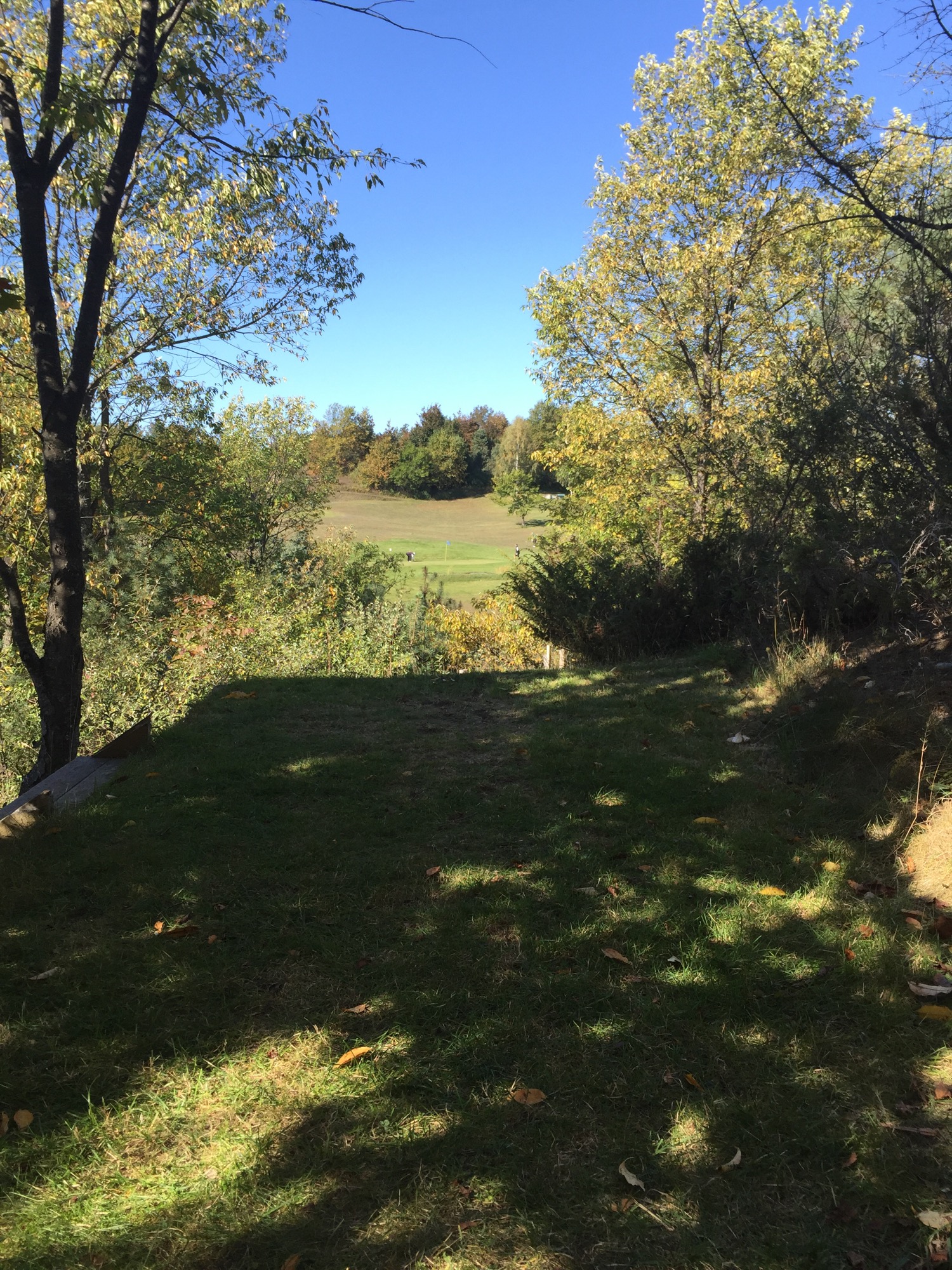 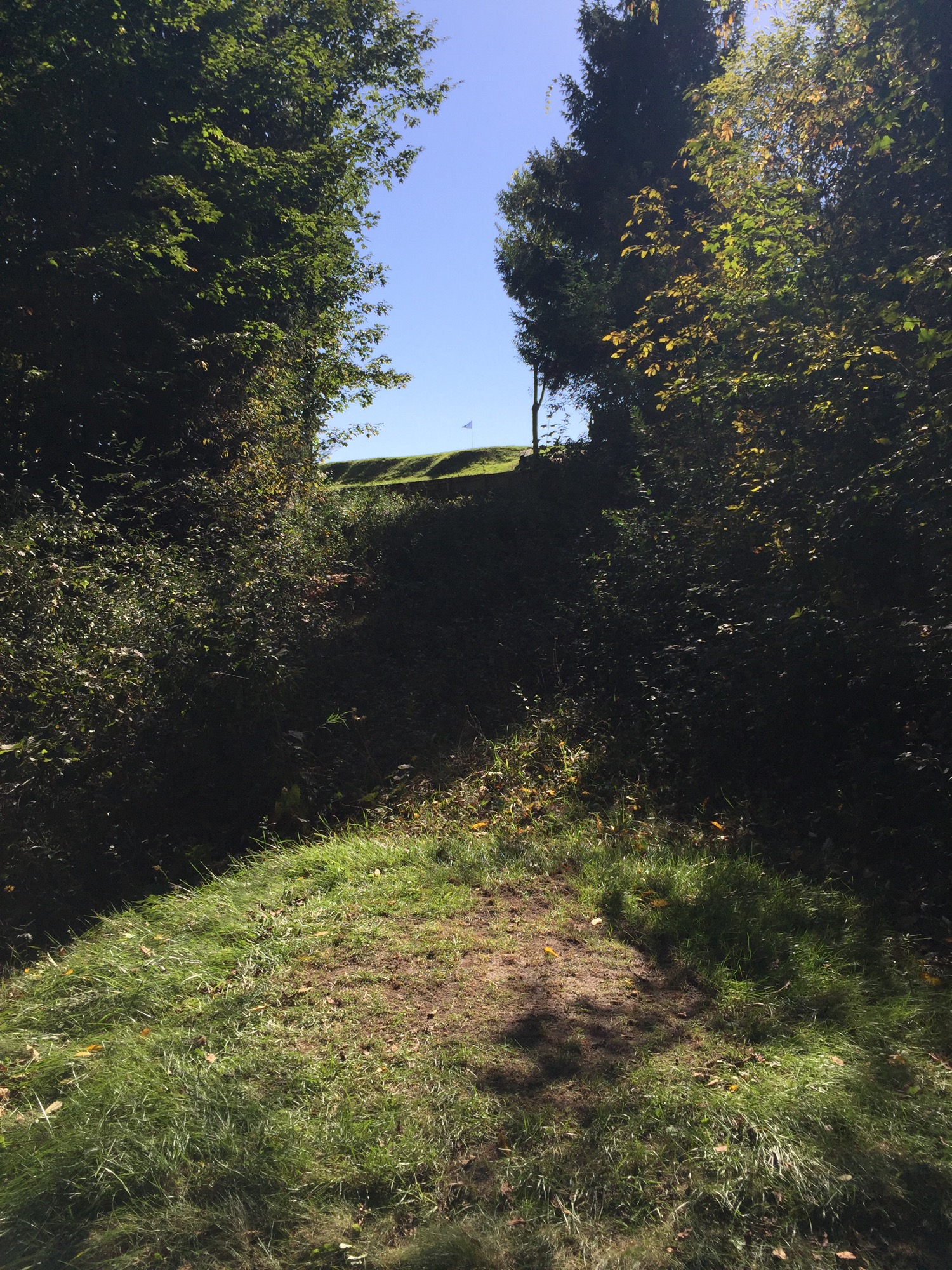 Hole 4 tee shot, 49 yards. A fat half sand wedge works well. Next is a shot from over the green. The penalty for going long is a second shot much longer than the tee shot. 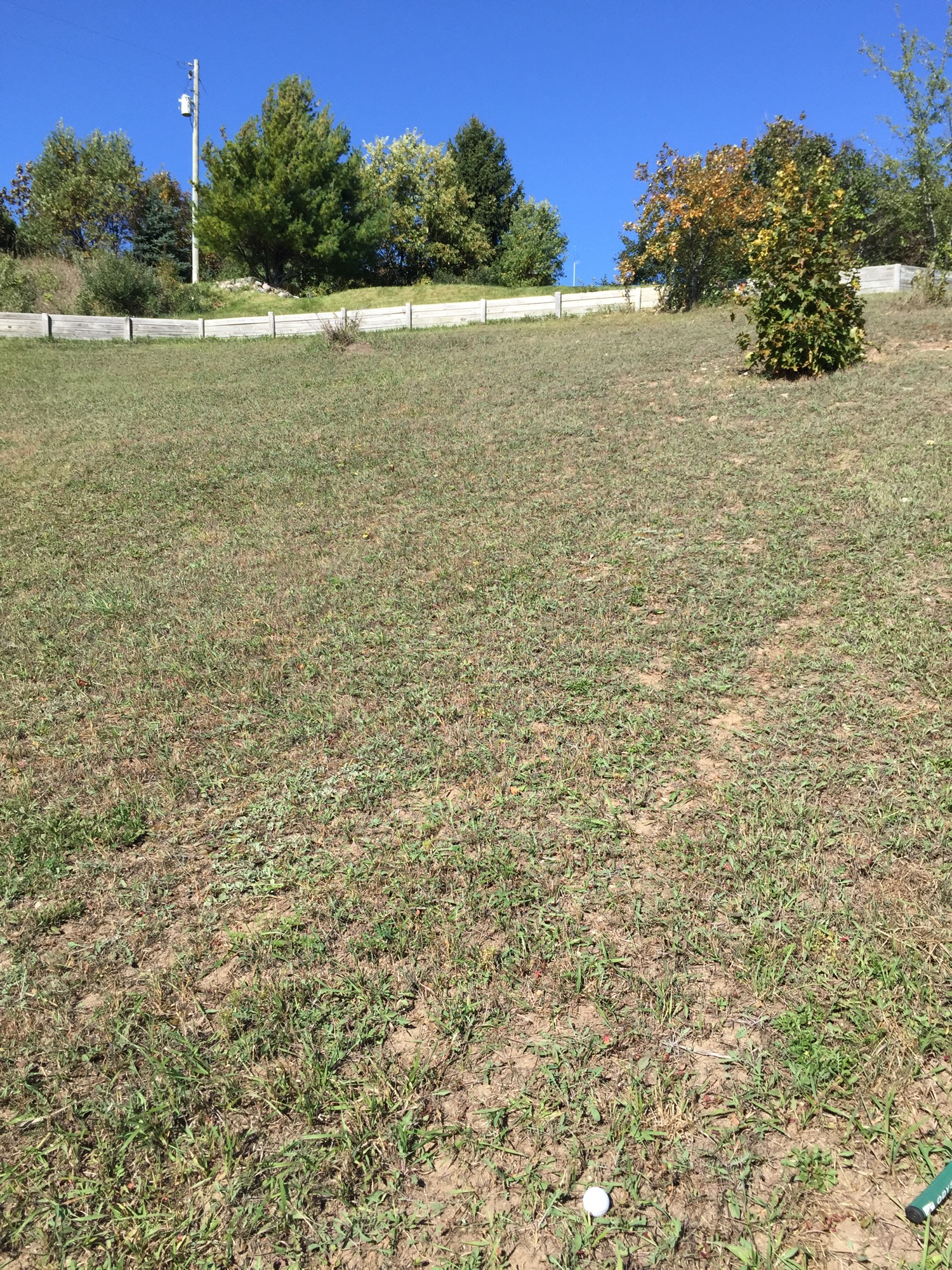 Beautiful view of Lake Michigan. If you look closely, you can see Gull Island and the stone fireplace ruins of the old Ustick house where many cherry pies were baked in the late 1930s. Here’s a link to the full story. 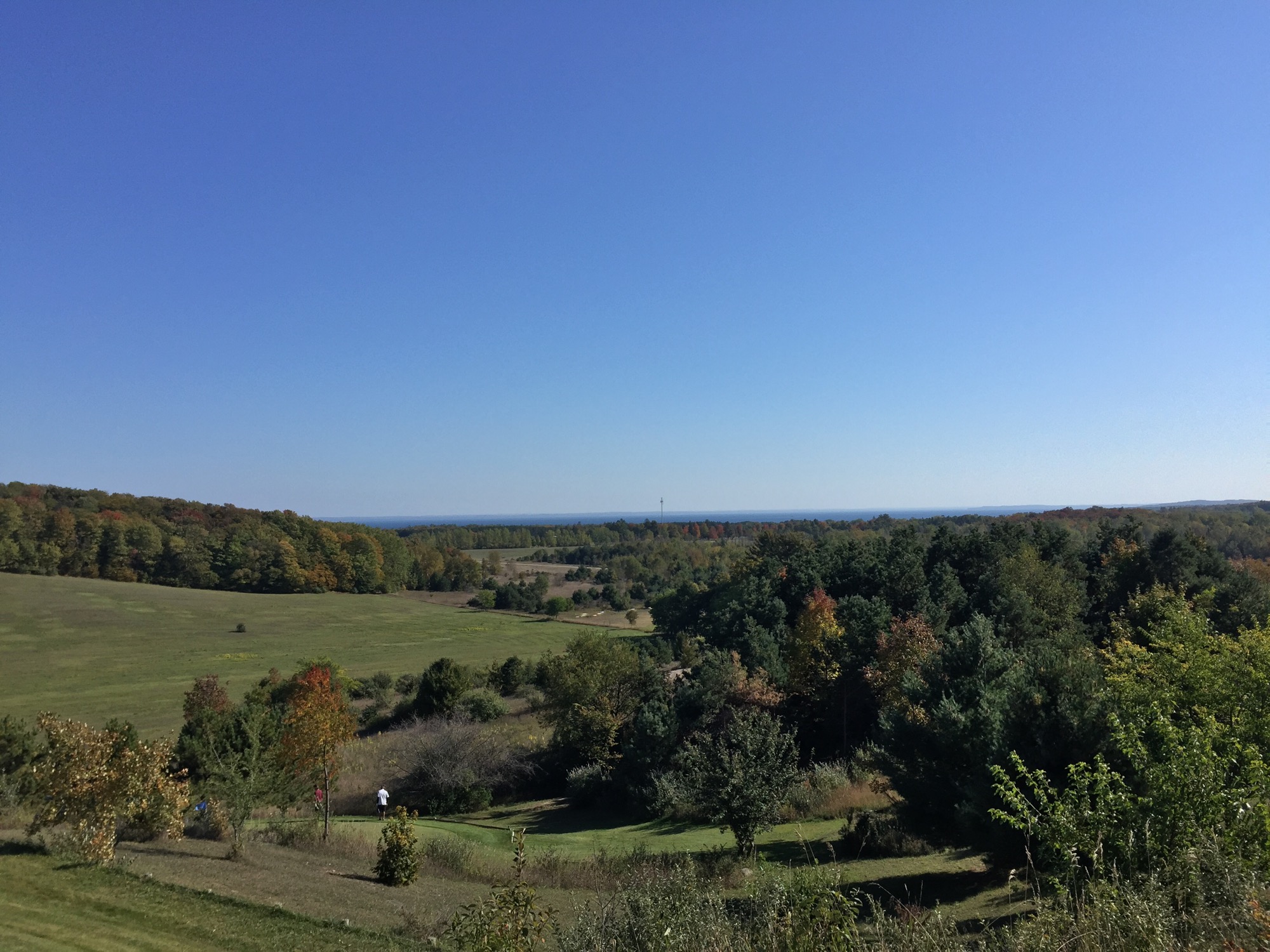 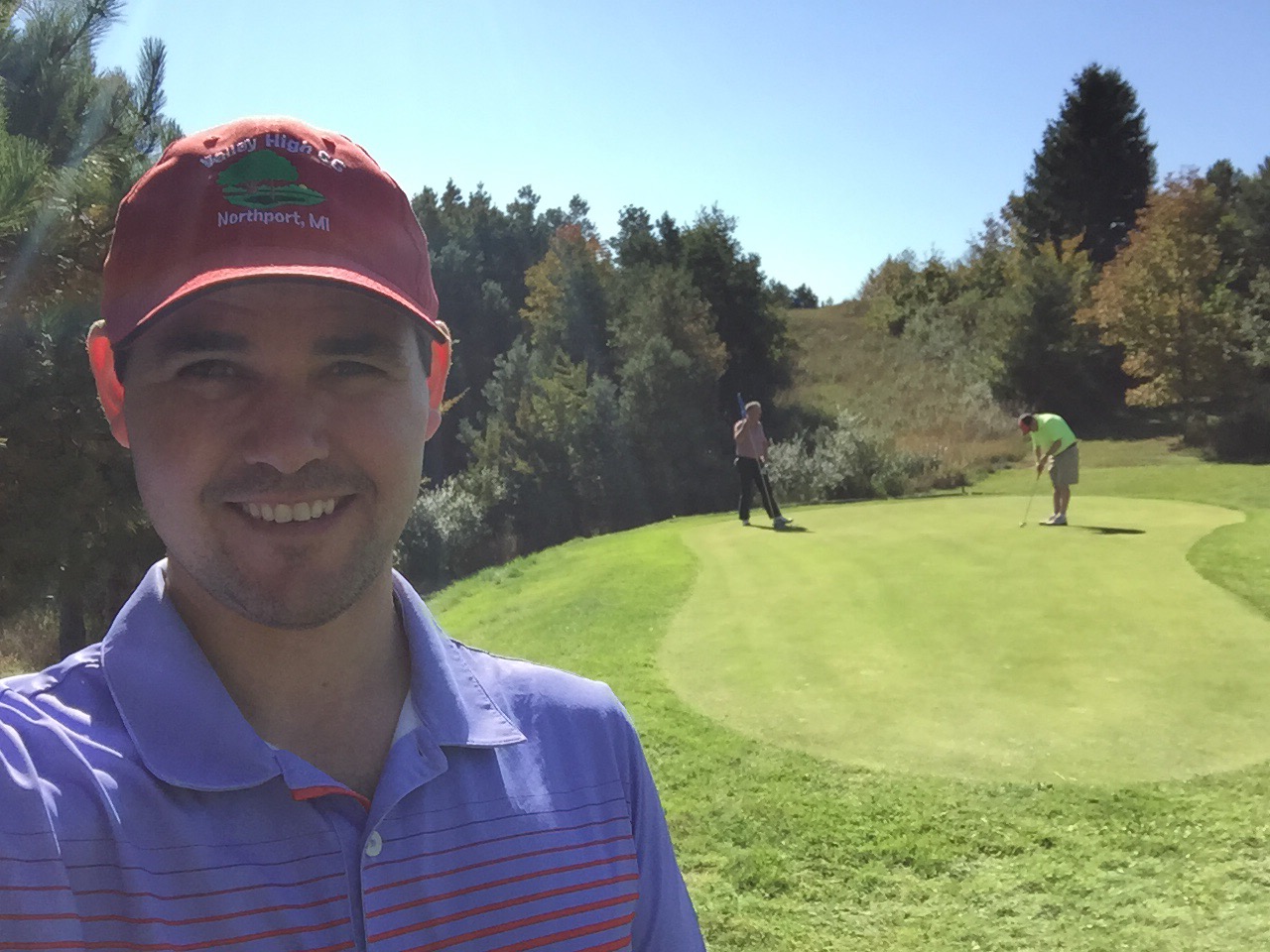 Above, Ed and Brandon putting on the 6th green. I’m wearing my souvenir hat. 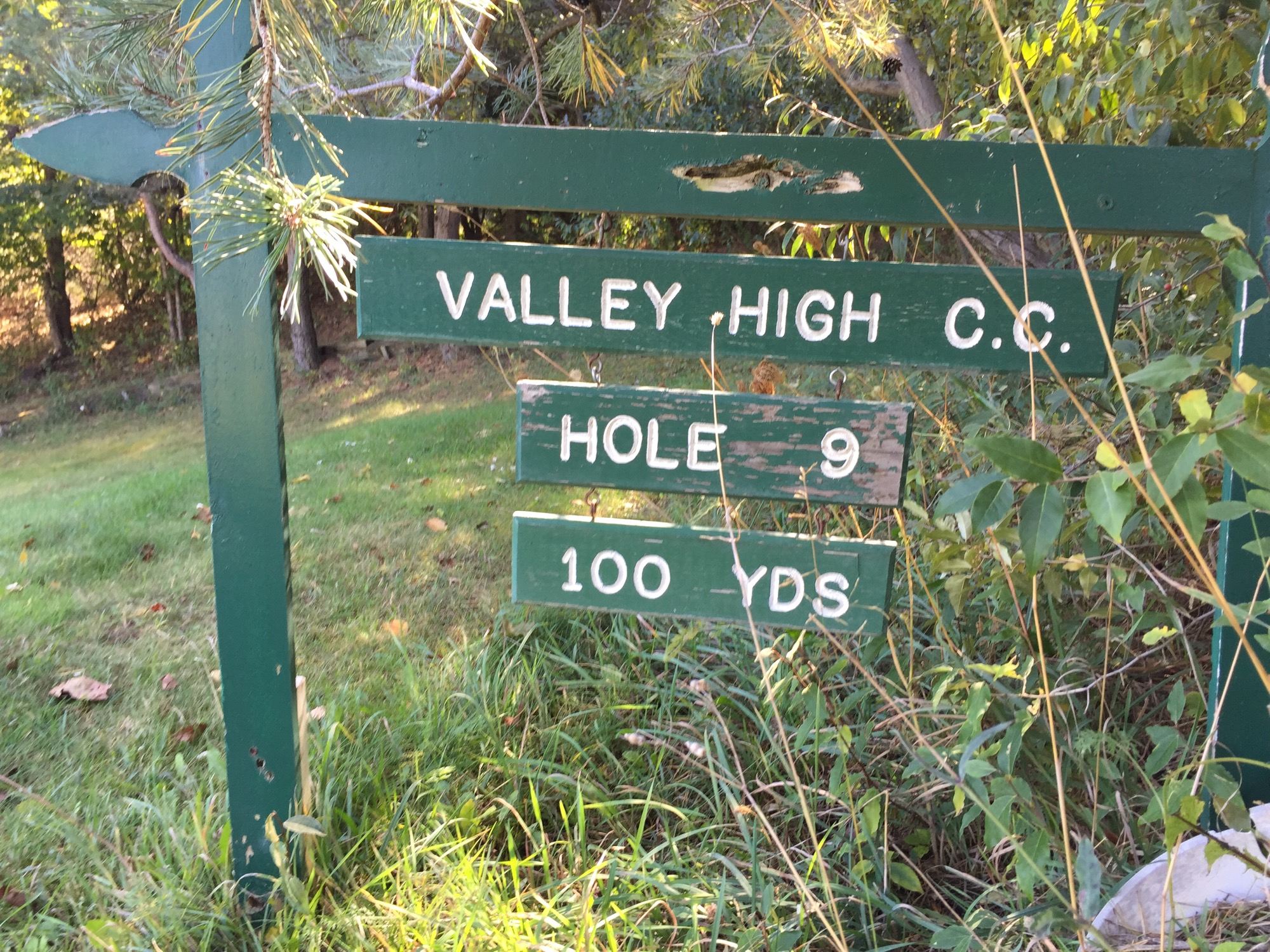 Looking across the 8th green, down to the 9th green. Clubhouse behind; range to the right. 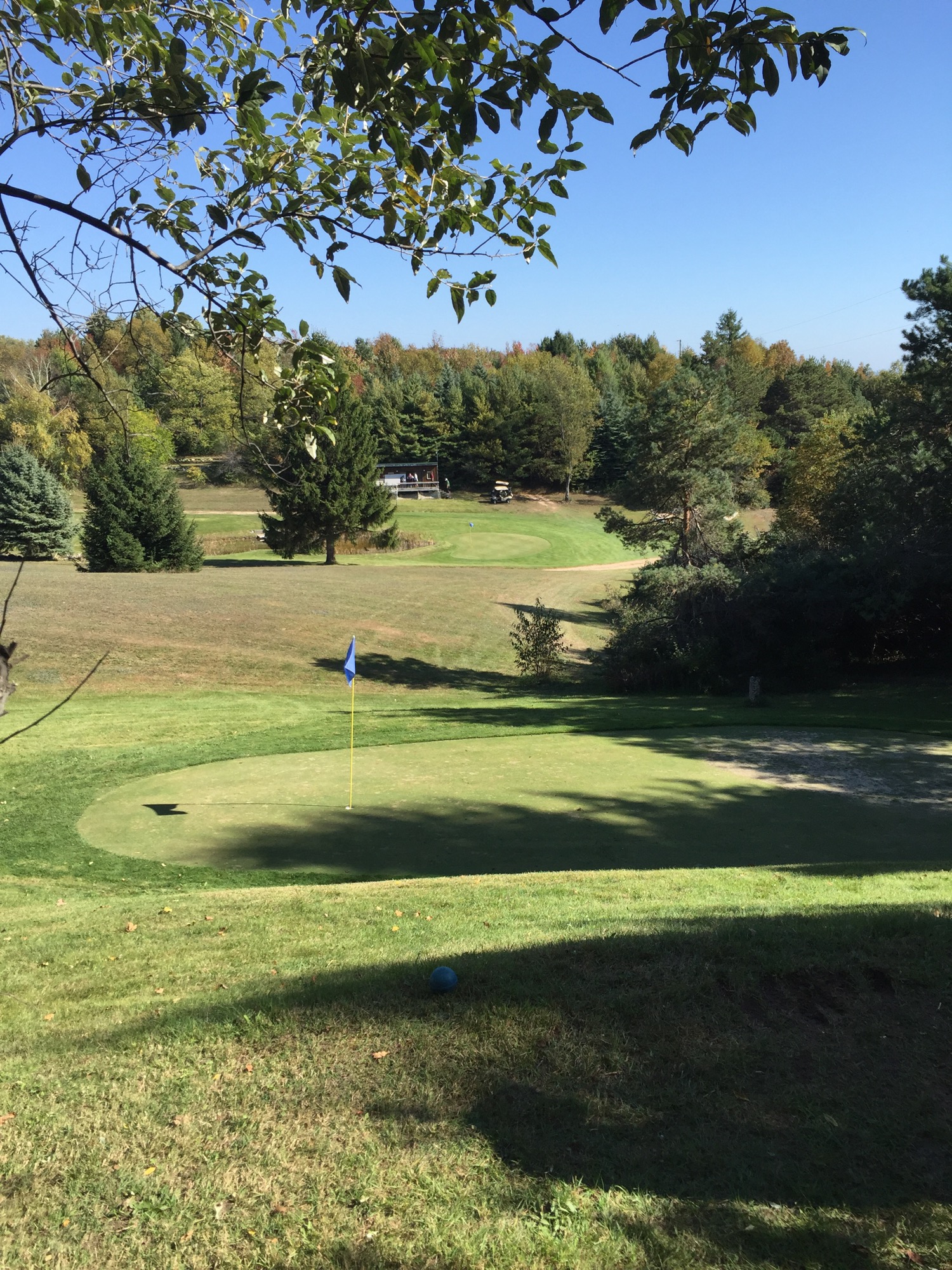 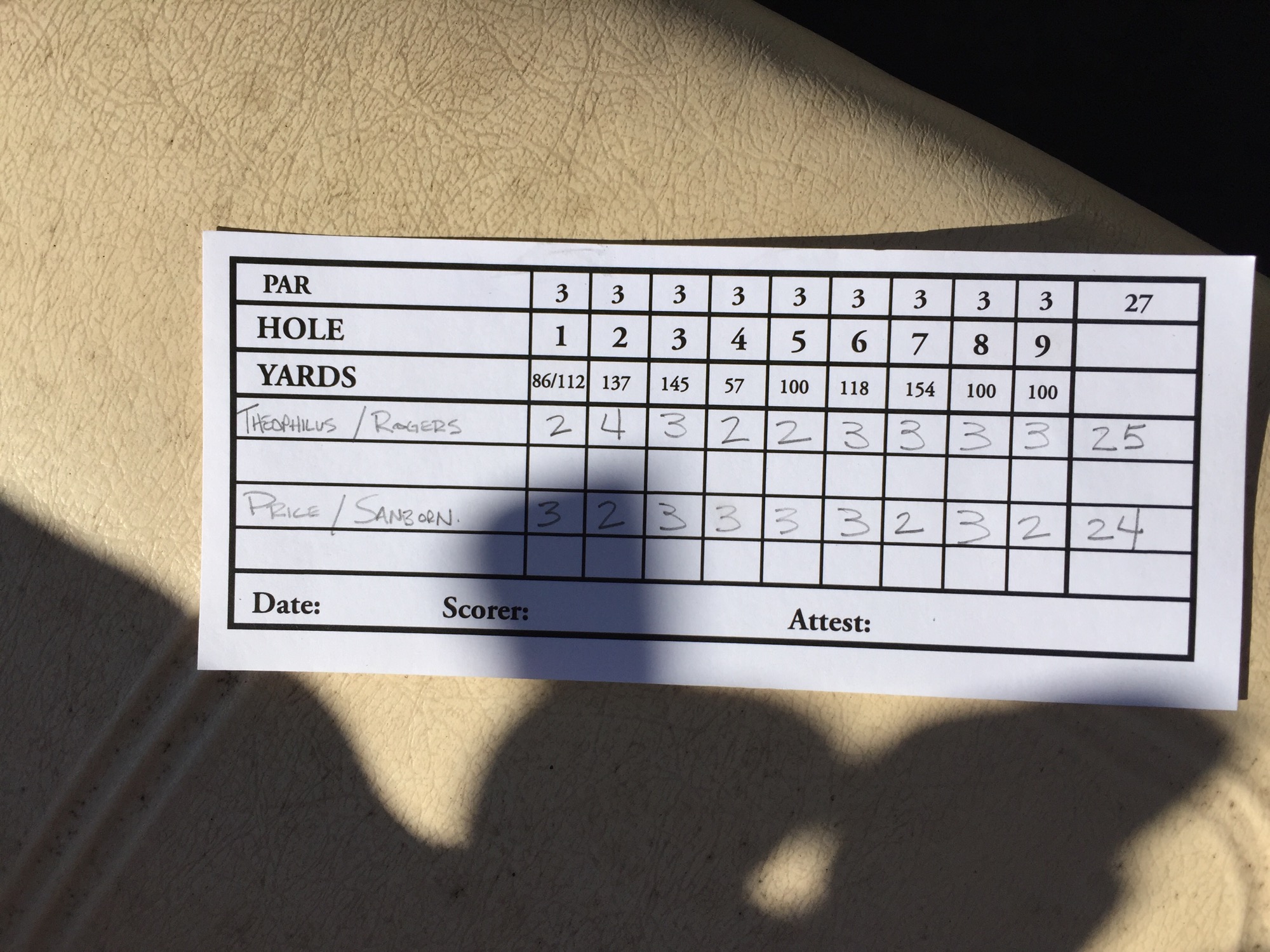 Nine guys. Many laughs. One hole-in-one.

I left early this morning to play the 2015 Union Championship. A few guys played a round Friday afternoon, but I was joining for the 36 holes at the Kingsley Club today. There was 18 holes at Arcadia Bluffs planned for Sunday, but that was cancelled for lack of attendance. The benefit of having the event close to home is that many of us don’t have to drive too far. The downside is the lack of a “captive audience.” Still, it was great to have a full day of golf on a tremendous course. We got a mix of weather – rain earlier in the day, wind throughout, and our fair share of sun.

This year’s participants were:

If’s fun catching up with these guys – some high school friends and others solely through this golf group. I hope that the group stays together for many years, and we continue to make the effort and take the time to plan these events at premier courses.

To review some of the play: Mike Dean made his first hole in one on the 9th hole in the morning. Following my lip-out PW, he hit a PW just left of the pin and spun it in. Congrats! My play was up and down all day. 78-76. I made my share of birdies, but also made too many doubles. Hutch had the round of the day in the afternoon when he posted a solid 69 (two under). I was glad to have him as my partner!

Morning “two best-ball of three” went to the team of Kellogg, Hutchinson, and Wicksall (I believe).

Afternoon “one best-ball of two” went to the team of Rogers and Hutchinson, although the team of Kellogg and Dean was close until the 17th hole.

Thanks to the Kingsley Club and Justin Mack for hosting our group, serving delicious breakfast sandwiches, and providing a stern and enjoyable test for the 2015 Union Championship.

Here’s a video from the day.

Had a chance to play in the Child and Family Services Golf Outing today with Jennifer Jones, Doug Morgenstern, and James Taylor. We had fun in the wind, and I won long drive for a bomb on the 10th hold. (I had just gotten lunch, which helped.) It was nice to see a lot of familiar faces, too!

Lindsey and I won the TCGCC Husband and Wife Club Championship for the fifth year in a row. We’re on a roll! I think we shot four under, total. Six holes are best-ball; six are alternate shot; and six are scramble. Always a fun event. Especially, with such a beautiful, straight-hitting partner!