DELICIOUS! Ok I have to apologize right away … I forgot to take a photo. But I love this dish.

Pour a little olive oil in a pan and saute a whole chopped up onion and a few garlic cloves, also chopped.

Add spinach (I had un froze a frozen kind), and then add chunks of sausage (I had cut up sausage links) .

Drain the water and mash the potatoes with a dash of nutmeg, a tablespoon of apple cider vinegar, 1/3 cup of skim milk and 1/2 cup of swiss cheese.

Mix it all together with the onion/sausage/spinach combo and place in an 8×8 baking dish. Cover with a 1/2 cup more of shredded swiss cheese and cook at 400 for 20 minutes or until cheese is bubbly!

Lindsey’s Rating – 9…I initially gave it a lower grade, but after having it for lunch the next day, it was even more amazing so it gets bonus points for left over ability. 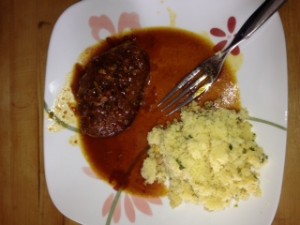 Success! This dish was divine.

Super easy to make and we heated it up the next day and it tasted just as amazing. 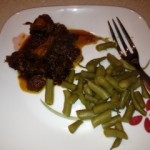 I think I overcooked the crap out of this…10 hours on low in the crockpot. The flavor was great but the meat was chewy. It was so disappointing because the house smelled out of this world when we got home from work.

In the future I would use less soy sauce, another can of cranberries and maybe some chopped up celery.

Chris’ Rating – 6 (I think he was being generous).

Today marks WEEK ONE! of my latest and greatest idea (and endeavor too a. cook more, b. become a better cook, and c. eat at home

Today I made Applesauce Delight!

Ease of making – 9.5….basically the only thing I had to do other than get the ingredients out of the fridge and toss them in the crockpot was chop up the onions and garlic.

Ingredients – 1 and 1/2 cup applesauce, cinnamon (I just poured some in), red pepper flake (same as cinnamon), pepper (same), 1 yellow onion chopped, and 3 garlic cloves chopped up, 3 frozen chicken breasts. Put it all in the crock pot – I was kind of behind after a long hike with yogi, so instead of 8 hours on low, I cranked my baby up to HIGH! 4 hours later, the house smelled amazing, kind of sweet and I was pleasantly surprised. In all fairness, I borrowed some ingredients from last night’s meal at Terry and Robbi’s (Mashed Potatoes and Corn Bread) and served it all up on a plate.

I LOVED IT! Chris liked it until he found a little piece of paper from the frozen chicken that I had forgotten to remove, but he ate seconds. It was a little spicy and really sweet at the same time and the chicken was divine and tender…yum yum yum.

Today I am inspired by Walt Disney – “All our dreams can come true, if we have the courage to pursue them”. I am praying that Chris and I have the courage to pursue our dream of having a beautiful home where we can raise Yogi for now, and someday a family. I have always been one to plan for the future….It is intimidating and daunting to think about the future, but I hope that we can take a leap of faith, and go for it!

Tonight Elke, my exchange sister from the Netherlands will arrive with her husband Jaap, (pronounced YAp), her adorable daughters Rene and Lara and our handsome long lost brother, Sandor! We are so excited to have them in town! Thankfully, I was given this whole week off, and so far, I am busier now than if I would be working! Last minute details are fun though!….until next time…..

A tip for Chris’ groomsman… 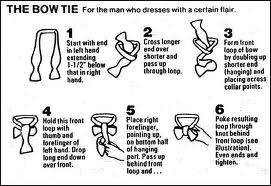